under lined words are links

When I was 17, I lived on ridpath in the canyon. these were the days of Vons cafe galleria, ed kienholz, wallace berman, jack la lane, gypsy boots, and a few other painters and writers. all a little before the 60s pile up of musicians and other groovers. one day as i walked down the hill at my ridpath house to vons galleria i fell in love. there in front of me in a 36 ford convertable with top down and rumble seat open was the most beautifull girl i had ever seen. i was simply awestruck by her classic bohemian beauty. long black hair , thick , tied in a pony tail that reached down her back, strong resolute classic almost grecian face. a gorgious no shit taking woman. 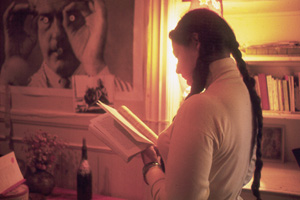 photo by Gene Anthony
with a powerfull vault over the car door she walked into vons. passing me without even a glance. a beautifull smell i had never smelled came over me in a cloud. in a moment she was back. she revaulted into the 36 and roared up the canyon. all i could think of was a way to meet her. so i went to my temple. the vedanta temple built by swami vivekananda years before in the hollywood hills. there i prostrated my self at the altar and asked the gods to some how let me meet her. i also thought the car was groovy so i asked for that too. in 1963 in san francisco i did meet her. and this time i was driving an identical car to the one she had. i had bought it when i arrived in the city. her name was lenore kandel.

She is a poetess. We had many great times in the 60s San Francisco scene. We never became lovers, but it did not matter. The gods had kept this pure love. And they gave it to her also. so may the gods bless her and keep her.michael bowen florence italy, big island hawaii 2000